Roles are the foundation blocks in MongoDB, providing user isolation for a great degree of security and manageability.

In this article, we’ll take a look at the most common roles in MongoDB. Then, we’ll explore role management by illustrating many common role-related functions.

A user can be assigned one or more roles, and the scope of user access to the database system is determined by those assigned roles. Users have no access to the system outside the designated roles.

Importantly, MongoDB access control is not enabled by default; you have to enable it through the security.authorization setting.

When that setting is enabled, users need to authorize themselves before interacting with the database. User privileges can include a specific resource (database, collection, cluster) and actions permitted on that resource.

A role grants permission to perform particular actions on a specific resource. A single user account can consist of multiple roles. Roles can be assigned:

There are two types of Roles in MongoDB:

Next, let’s look at the variety of roles in more details. 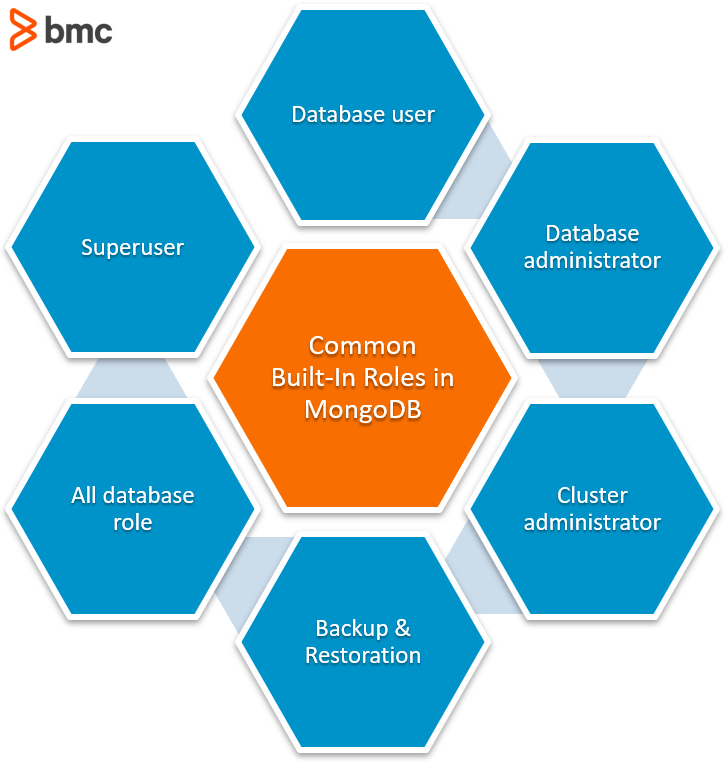 In this section, we’ll go through the most common built-in roles of MongoDB.

These are roles that are used to carry out administrative operations on databases.

These roles enable users to interact and administrate MongoDB clusters.

These are the roles that are required for backup and restoring data in a MongoDB instance. They can only be assigned with the admin database.

These are database roles that provide privileges to interact with all databases, excluding local and config databases.

MongoDB can provide either direct or indirect system-wide superuser access. The following roles grant superuser privileges scoped to a specified database or databases.

The true superuser role is the root role, which provides systemwide privileges for all functions and resources.

For a detailed explanation of all the user roles and privileges, please refer to the official MongoDB documentation.

In situations where built-in roles are unable to provide the necessary privileges covering the scope of the access requirements or to restrict the scope and actions of a user, you can define custom User-Defined roles.

MongoDB Role Management provides the necessary methods to create and manage user-defined roles. The most commonly used methods for user-defined role creation are shown in the following table. (A complete list of methods can be found here.)

In this section, Let’s discuss how to create and modify roles within a MongoDB instance.

First, create a user with read and write access to a specific database (supermarket) using the createUser method with roles parameter. 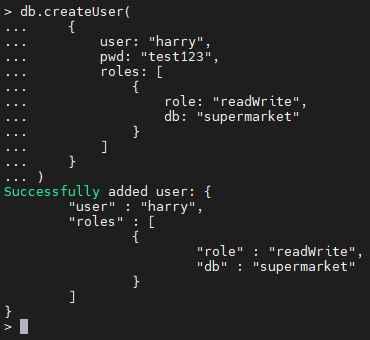 Then, create an administrative user to the supermarket database with roles granting read access to all other databases and the backup and restore functions. 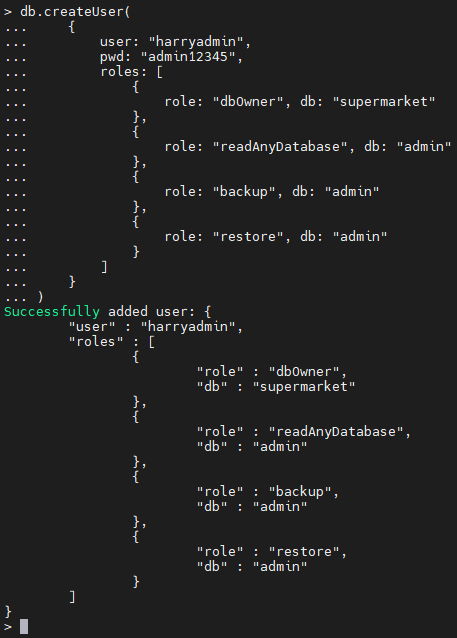 As shown in the above code-block, you can create users with multiple roles providing access to a wide range of functionality within the database.

Using the getRole method, users can obtain information about a specific role. The below code shows how to get the details of the readWriteAnyDatabase role from the admin database.

To obtain the privileges associated with that role, use the showPrivileges option by setting its value as ‘true’. This can also be used in the getUser method. 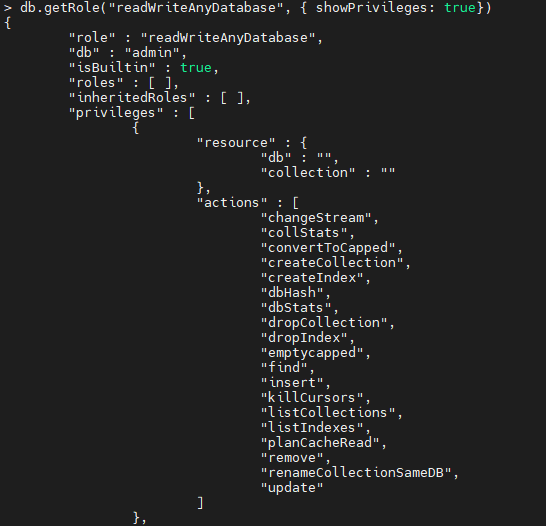 The getUser method enables you to identify the roles assigned to a specific user by using the following syntax:

In the below example, you can retrieve the user details of the users, “harry” and “harryadmin” with their roles using the getUser method. 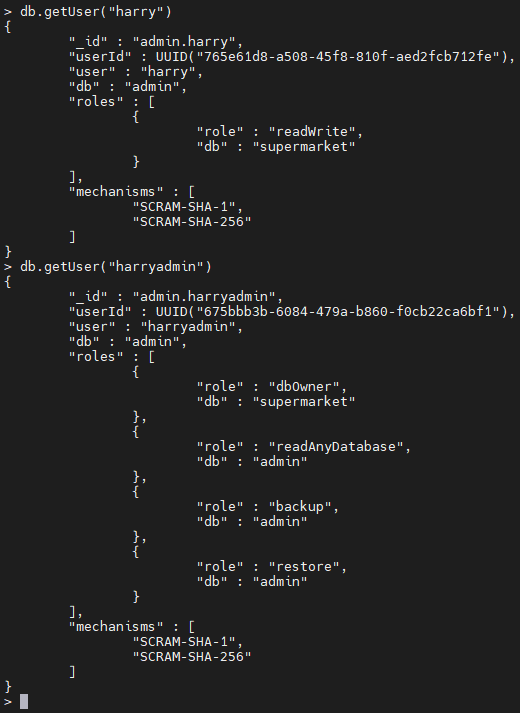 Using the grantRolesToUser and revokeRolesFromUser methods, you can modify the roles assigned to existing users. These methods use the following syntax:

The below example shows how to grant user roles. You will add a new role to the user “harry” providing the necessary privileges to act as the database admin (dbAdmin) to gather statistics from the “vehicles” table. 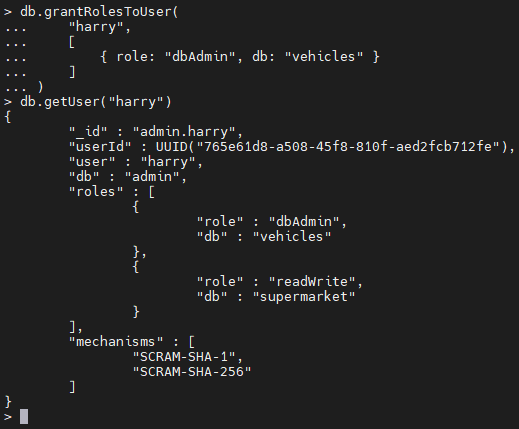 Now you have added a new role to the user, “harry”. So, let’s remove that newly granted role using the revokeRolesFromUser method. 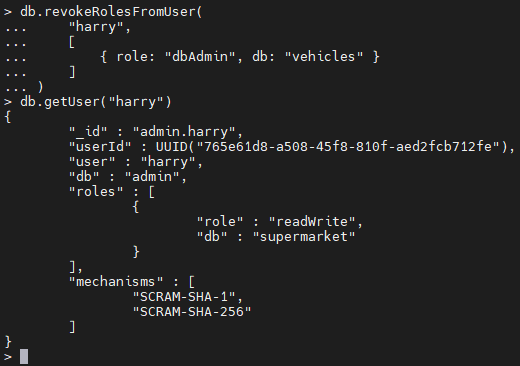 To associate a user-defined role to all databases or collections, you can specify the resources with empty double quotes, as shown below.

In the next code block, you will create a role that limits a user’s access to a specific database collection (inventory collection of supermarket database). It limits the user actions to find and update commands without inheriting any other privileges. 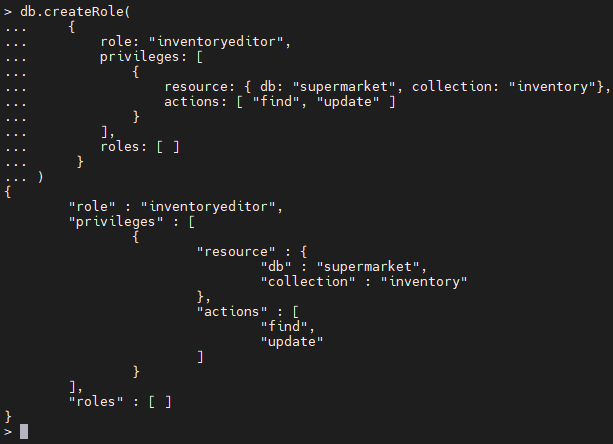 We can identify the user-defined roles using the isBuiltin parameter. The inventoryeditor role has false for the that parameter, indicating it as a non-built-in role.

In the below code block, you will create an inventorymanager role with all the CURD privileges and inherit the privileges from the userAdmin role. 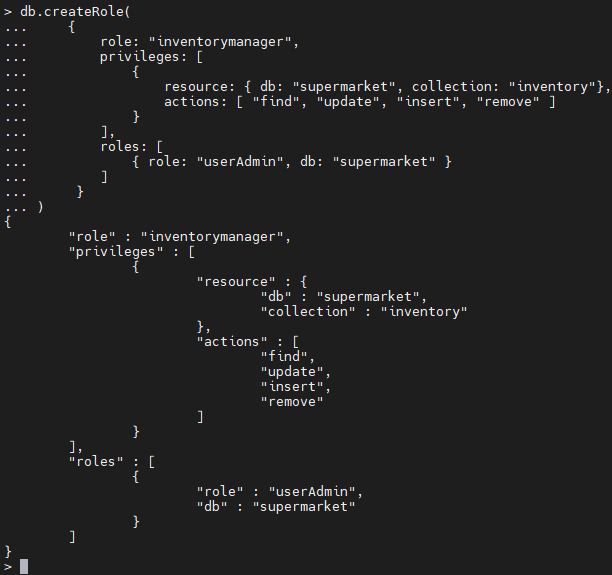 If you check the inventorymanager role using the getRole method, it will display the details of the role, including the inherited permissions. 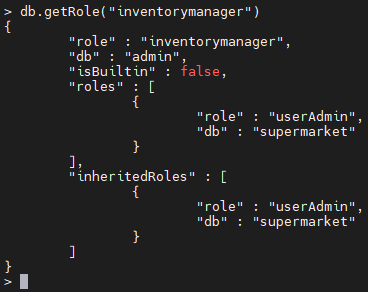 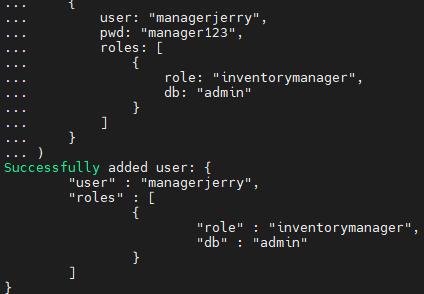 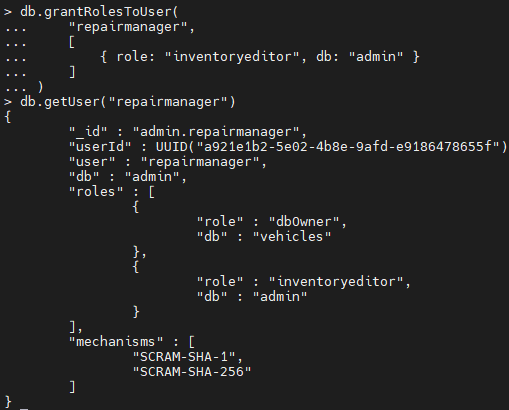 Let’s update the inventoryeditor role with an additional privilege to create documents within the specified collection, in the below example. 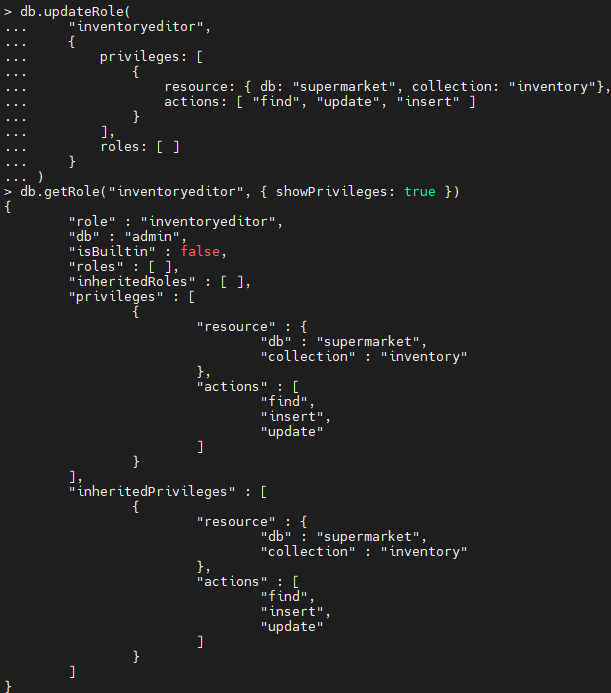 The most important thing to keep in mind when updating roles is that it will completely replace old values in the privileges and roles arrays. Therefore, you need to provide the complete arrays with the modifications when updating a user-defined role.

The dropRole method has a single functionality to remove a user-defined role. You can remove the inventoryeditor role from the database, as shown below.

The above screenshot indicates that the role deletion was successful, and if we try to retrieve the deleted role, it will return a null value. When a role is deleted, it will affect all the users associated with the deleted role, revoking all the privileges granted by that user-defined role. 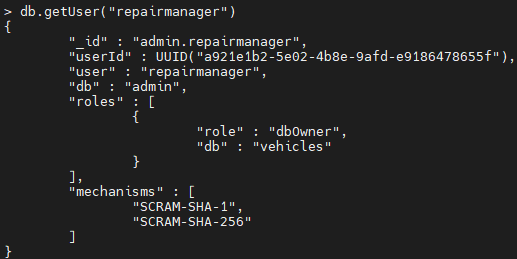 In situations where only a single user-defined role is assigned to a user when the said role is deleted, it will result in an empty roles array, effectively denying all user privileges.

You can check this scenario by deleting the inventorymanager role and getting the managerjerry user details. This will result in an empty roles array for the user managerjerry, demonstrated below by comparing the user details before and after the role deletion. 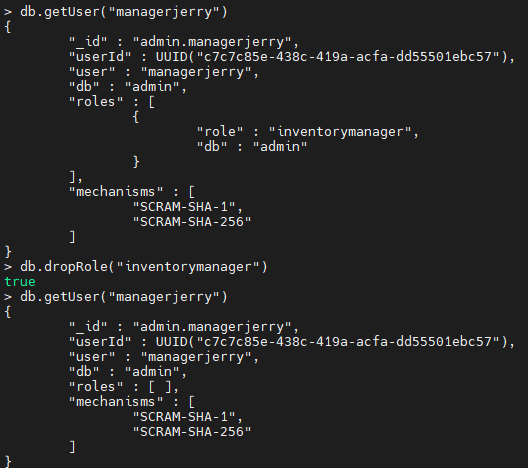 Thus, it is paramount that you check if the roles are associated with any users and how it will affect the user’s functional scope before deleting any user-defined roles.

As a final remark, the dropRole method can only delete user-defined roles. If you try to delete a built-in role using that method, it will result in an error, as shown below.

That concludes this comprehensive look at MongoDB roles and role management.