This article is about the default client for MongoDB: the MongoDB Mongo shell. In this article, we’ll:

What is the MongoDB Mongo shell?

MongoDB Mongo shell is an interactive JavaScript interface that allows you to interact with MongoDB instances through the command line. The shell can be used for:

MongoDB Mongo shell is the default client for the MongoDB database server. It’s a command-line interface (CLI), where the input and output are all console-based. The Mongo shell is a good tool to manipulate small sets of data.

Here are the top features that Mongo shell offers:

MongoDB has recently introduced a new mongo shell known as mongosh. It has some additional features, such as extensibility and embeddability—that is, the ability to use it inside other products such as VS Code.

If you want to install it separately, you can visit the MongoDB download center, from there select the version and package you need, download the archive, and copy it to a location in your file system.

Mongo shell is available for all main operating systems, including:

Once you’ve downloaded and installed MongoDB, you can use the mongo shell to connect with a MongoDB server that is up and running.

Note: It is required that your server is already running before you connect with it through the shell. You can start the server in CMD using the following command.

Then type mongo command to run the shell.

Now you are in the Mongo shell.

If you want, you can run the mongo and mongod without the command prompt. To do this, go to the installation location and double click on the mongod and mongo applications. You will get the same result as the above.

Both of the above commands only work if your MongoDB server is running on the localhost. If you want to connect to a remote server, use the `–host` option with the mongo command, as shown below.

Now it’s time to work with the Mongo shell. First, we will learn some basic commands that will help you to get started with using MongoDB.

Run the use command to switch to a different database. If you don’t have a database, learn how to create a new database.

You can create collections and insert data with the following command:

Use the find method to fetch data in a collection. The forEach(printjson) method will print them with JSON formatting

Use the show dbs command to Show all databases

To get a full list of commands that you can execute on the current database, type db.help() 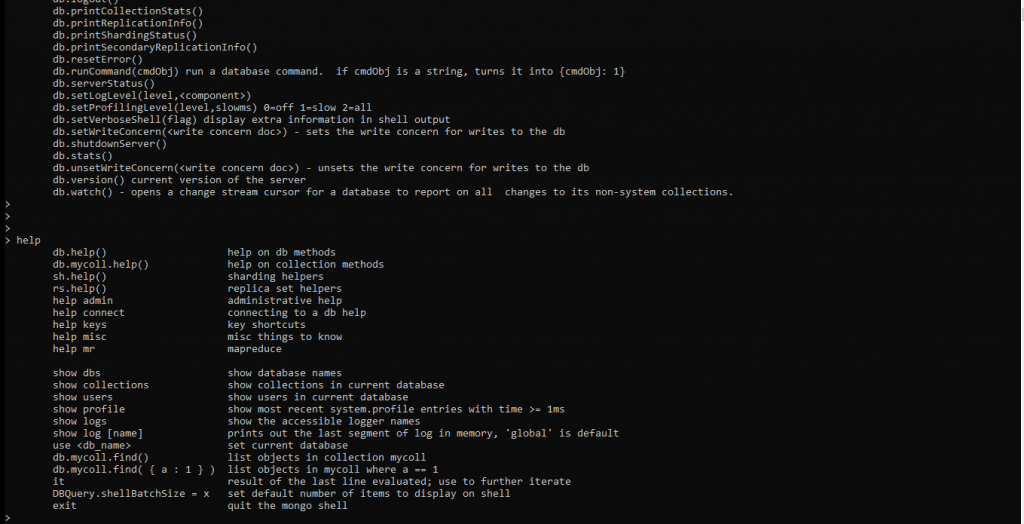 We will discuss more data manipulation commands in coming tutorials. For a full list of commands, check out the official Mongo shell page.

There are two important keyboard shortcuts that you should know:

Disadvantages of the mongo shell

Although the Mongo shell is an excellent tool for learning and testing the MongoDB server, it is difficult to be used in a production environment. Being a shell inherently carries certain disadvantages. Let’s see what they are:

So now you know the mongo shell has some disadvantages. At this point, you may want to know what other options are available. MongoDB developers have introduced drivers specific to each programming language to connect with the MongoDB databases when using MongoDB in your applications. You can find them here.

Additionally, many people prefer to use GUIs to work with databases nowadays. One of the best GUI tools for MongoDB is the MongoDB Compass. Some other useful GUI tools are:

Remember that the best MongoDB GUI depends on the task that needs to be accomplished. MongoDB Compass is the go-to option if you need to avoid the command line completely. Robo 3T is simple and well supported by the community, while NoSQLBooster is shell centric smart GUI tool.

With that, we’ve reached the end of this tutorial. Now, play with the shell and get practice.