DevOps is a trending topic that’s popular for increasing company productivity, no matter your industry. Every day more companies work to bring this disruptive model to their organizations.

DevOps has one primary goal to achieve: continuous integration to continuous delivery.

In doing so, the development and operations processes become faster and more resource friendly. Companies can save money while producing more high-quality software products for customer consumption or internal use.

In this introductory article, we’ll explain the basic concepts of DevOps, including how we got here, best practices, key topologies, and the most common benefits of a DevOps environment.

Traditionally in the IT industry, employees belonged to the development or ‘dev’ team. A separate team known as IT operations or ‘Ops’ worked to support IT.

Dev and Ops teams had separate leadership, responsibilities, and objectives to achieve. In many companies, the teams worked on separate floors and rarely communicated. This ‘silos’ culture led to poor communication and collaboration among these teams—a rigid barrier between them that they’d bridge only when absolutely required.

The major organizational culture shift of DevOps successfully broke this silos mentality, bridging the gap between the Dev and Ops teams by making them:

Nowadays, DevOps is widely embraced by the IT industry, including leading tech companies such as Amazon, Facebook, Google, Netflix, and BMC Software. More recently, companies are looking at how to spread the principles of DevOps across the entire organization, beyond IT.

Before the year 2000, most IT industries adopted the classical waterfall model, a linear approach for software development.

The result? A large, sometimes years-long gap between software releases, with frequent bug fixes and software patches deployed between each release.

With the establishment of the Agile software methodology, IT industries moved on to developing software iteratively and frequently released them into production. Continuous Integration (CI) and Continuous Delivery (CD) are among the major techniques adapted in this model for the rapid delivery of software. (We’ll look at these concepts shortly.)

DevOps consequently promoted the smooth collaboration between development and operations teams at each step of the cycle. So, we can safely say that DevOps has its roots in the Agile methodology.

(Learn more about the history of DevOps.)

When transitioning to a DevOps culture, organizations must change two important components:

Generally, in a DevOps culture, both Dev and Ops teams work collaboratively through frequent communication.

These engineers aim to increase the productivity and the quality of service to deliver the maximum value to their customers. 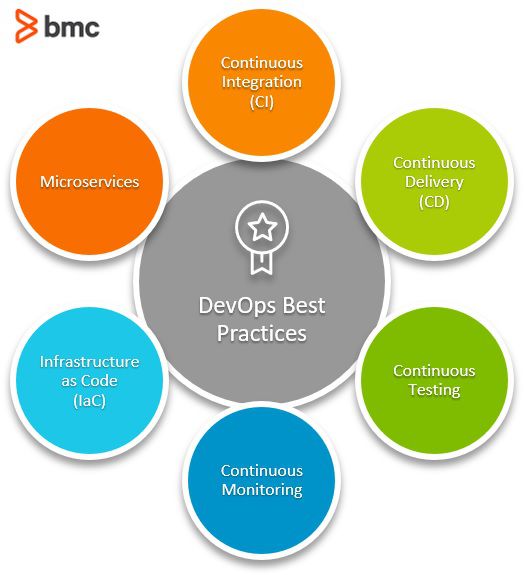 Of course, DevOps isn’t only about communication and collaboration. DevOps best practices are aimed to help you release software frequently and with the best quality. Prioritizing high efficiency, DevOps encourages the widespread use of tools to automate manual tasks.

Let’s take a look at common practices and related tools of any DevOps culture.

Traditionally, developers manually updated their code and then manually tested it.

Continuous Integration (CI) is a DevOps practice in which developers frequently merge their code changes to the central repository. Then, the code is built automatically and automated tests are run against the built code.

The main objective of this is to quickly identify bugs to improve the quality of the software.

In Continuous Delivery (CD), merged code changes are automatically built and deployed to a testing environment. Then, automated tests are executed against the deployed code to identify any bugs and allow the developers to fix them in advance.

Typically, the code is deployed to different testing environments progressively, where the code achieves a higher level of quality through a standard automated testing procedure before deploying to the production. Continuous Delivery ensures that the team always has a development-ready code.

CI/CD tools such as Jenkins, Bamboo, Travis, TeamCity, and many others help automates these tasks.

The Continuous Testing practice helps to identify potential risks as early as possible in all stages of the development lifecycle to minimize the impact on end-users.

Selenium, Travis, and Appium are some popular continuous testing tools in the IT industry.

The application, infrastructure, middleware, and networks will be monitored continuously for their performance, any defects, or security and compliance. To identify issues, most companies monitor metrics such as:

By putting continuous monitoring into practice, you’ll always be alerted about any issues in environments from testing to production, helping you ensure high availability.

Infrastructure as Code (IaC) is a practice where infrastructure—virtual machines, load balancers, networks, etc.—are configured and managed using code rather than manually setting up and managing those resources. This has become an essential DevOps practice in organizations who specifically have moved to cloud platforms.

For example, Amazon Web services (AWS) provides APIs to programmatically interact with their cloud infrastructure. The use of code to define configuration helps to standardize the process allowing them to quickly deploy resources to the cloud.

Unlike in traditional monolithic architectures, in microservices architecture, a single application is built as a set of small services or components. These separate services have their own functionality and their communication happens through a lightweight interface or an API.

As a widely adapted architecture in DevOps culture, microservices: This is the ideal DevOps team structure where Dev and Ops teams smoothly collaborate. For example:

Implemented at Facebook and Netflix, this topology consists of Dev teams with Operations teams integrated into them. You will see only a small separation between Devs and Ops.

This is most suitable for companies that have single web-based applications.

This topology is suitable for organizations with different/multiple services which are hosted in the cloud platforms, but still have a traditional IT Operations department that is unlikely to change. Their Ops team is similar to infrastructure as a service (IaaS).

Some organizations may not have the expertise or can’t afford to have a separate ops team. Here, the dev teams can get support from a service provider who can manage the responsibilities of the software’s operational aspects.

DevOps teams with an expiry date

This structure functions as a temporary team that works towards bringing Dev and Ops teams together. That temporary team will become obsolete after achieving the pre-defined goal.

This topology is most suitable for teams that tend to drift apart. The advocacy team facilitates the dev and ops groups, keeping them engaged and continually making them aware of DevOps practices.

Adapted in Google, this topology consists of a Site Reliability Engineering (SRE) Team. Devs need to provide evidence that their software is up to standards—and the SRE team can reject it if proven otherwise.

Containerization is the practice of encapsulating an application deployment and run-time requirements into a container. This removes some collaboration dependencies between Dev and Ops teams.

This structure is suitable for an organization that has a robust engineering culture.

Some organizations that have multiple applications connected with large central databases have experimented with this topology. The structure is that database (DBA) specialization roles in both DBA and Dev teams are integrated, helping to bridge the gap between both parties.

Organizations that embrace the DevOps culture see improvement in a lot of aspects of their software delivery process, including:

DevOps is beyond a business model

Due to its abstract nature, it’s difficult to define DevOps in just a couple sentences. As I said earlier, DevOps is not just a business model but a cultural shift to integrate and automate software development and operations processes into a single unified workflow, focusing on the rapid release of high-quality software that satisfies the customer requirements.

DevOps achieves its excellence by integrating defined best practices into each step of the software development life cycle. Organizations are required to identify the team topology that best suit them in DevOps to strive for in the long term.