Containerization of applications involves packaging application code in a virtual container with its dependencies—the required libraries, frameworks, and configuration files. This approach aids portability and operates consistently across various computing environments and infrastructure, without losing efficiency.

One particularly popular container platform is Docker. Organizations use Docker for developing applications that are:

Through its lightweight run-time environments, Docker containers share underlying operating systems to host applications that support a DevOps environment. Being a critical element of the Cloud-Native framework, Docker brings numerous benefits to your software development lifecycle (SDLC). But those benefits aren’t without risk. You’re likely to face complexities, particularly when it comes to securing the Docker framework.

By default, Docker containers are secure. However, it is imperative that you know possible vulnerabilities in order to adopt an approach that safeguards against potential security risks.

So, in this article, we’ll look at the best practices for securing a Docker-based architecture across three key areas: 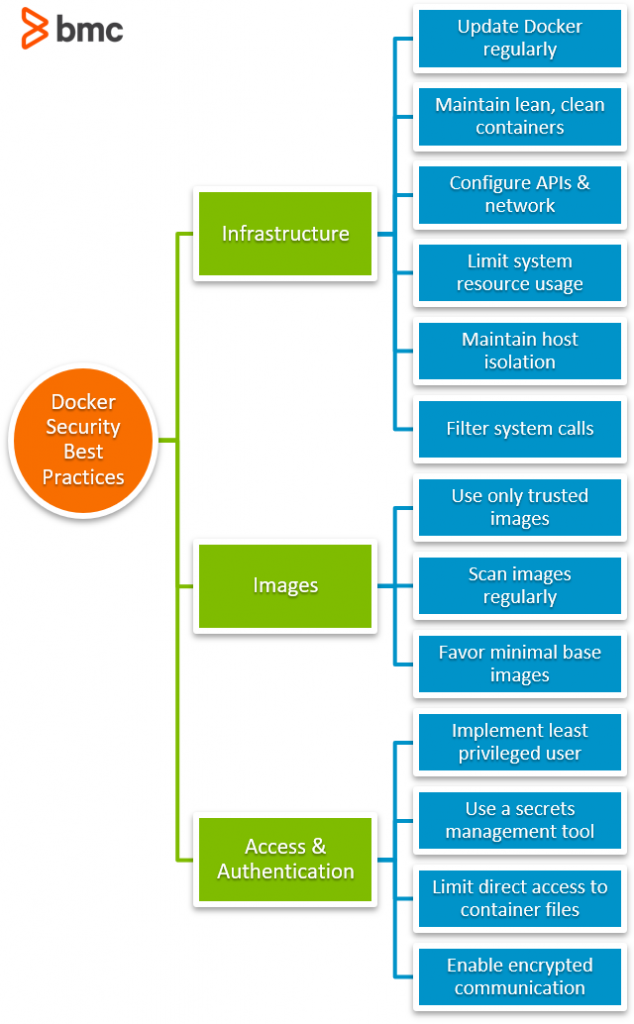 Containers are virtualized units that can host applications. To do so, containers hold:

Since containers form the foundation of a cloud-native setup, securing them from potential attack vectors is a critical activity throughout the container lifecycle. A holistic approach to securing such a framework is to protect not only the Docker container but also its underlying infrastructure.

Let’s break down the best approach to securing infrastructure and see how it works.

The same holds true for the host environment: ensure that supporting applications are up-to-date and free of known bugs or security loopholes.

An extended container environment expands the attack surface and is comparatively more prone to security breaches than lean setups. To avoid this, configure your containers to contain only the necessary components that keep them operating as you intend:

Further, routinely check host instances for unused containers and base images and discard those that aren’t in use.

To avoid this, protect your containers by securely configuring the API that restricts them from being publicly exposed. One approach is to enforce encrypted communication by enabling certificate-based authentication.

Docker uses Control Groups that limits the allocation and distribution of resources among the different processes. This approach prevents a compromised container from consuming excessive resources that could disrupt service delivery in the event of a security breach.

Maintaining the isolation of containers through different namespaces serves to protect critical data from a full-blown attack. This approach also prevents noisy neighbors from consuming excessive resources on pool-based isolation to impact services of other containers.

By default, Docker containers can maintain and acquire additional privileges that may or may not be necessary to run its core services.

As a best practice, you should limit a container’s permissions to only what is required to run its applications. To do so, use the command to drop all privileges of the Docker container:

Following this, add specific privileges to the container with the –cap-add flag. This approach restricts Docker containers from obtaining unnecessary privileges that get exploited during security breaches.

Apply system call filters that allow you to choose which calls can be made by containers to the Linux kernel.

Now, let’s move to security best practices beyond the infrastructure.

Docker images are templates of executable code that are used to create containers and host applications. A Docker image consists of runtime libraries and the root file system—making the image one of the most critical fundamentals of a Docker container.

Here are some best practices to follow when it comes to securing Docker images.

Get Docker base images only from trusted sources that are up-to-date and properly configured.

It is crucial to maintain a robust security profile of Docker Images and routinely scan them for vulnerabilities. Do this in addition to the initial scan before downloading an image to ensure it is safe to use.

With regular image scans, you can also minimize exposure by:

The final category for Docker Security involves access and authentication.

By default, processes within Docker containers have root privileges that grant them administrative access to both the container and the host. This opens up containers and the underlying host to security vulnerabilities that hackers might exploit.

To avoid these vulnerabilities, set up a least-privileged user that grants only the necessary privileges to run containers. Alternatively, restrict run-time configurations that prohibit the use of a privileged user.

Use a secrets management tool

Never store secrets in a Dockerfile that may allow a user with access to the Dockerfile to misplace, misuse, or compromise an entire framework’s security.

Standard best practice is to safely encrypt key secrets in third-party tools, such as the Hashicorp Vault. You can use this same approach for other container secrets beyond access credentials.

Transient containers require consistent upgrades and bug fixes. As a result, such container files are exposed each time a user accesses them.

As a best practice, maintain container logs outside the container. This drastically reduces consistent direct usage of container files. It also enables your team to troubleshoot issues without accessing logs within a container directory.

Use TLS Certificates for encrypting host-level communication. It’s also essential to disable unused ports and keep default ports exposed only for internal use.

Securing Docker secures your IT environment

Security within an IT landscape is a critical mission that you should never overlook.

To secure a cloud-native framework, the first step always is to factor in the vulnerabilities of your framework’s key elements. As a result, organizations should maintain a robust security profile that centers around containers and their underlying infrastructure.

Though approaches to implementing end-to-end security may differ, the goal is always to factor in vulnerable points and adopt best practices that mitigate risks.