Here is yet another example of how useful and powerful Pandas is. Pandas can create dataframes from many kinds of data structures—without you having to write lots of lengthy code. One of those data structures is a dictionary.

In this tutorial, we show you two approaches to doing that.

A word on Pandas versions

Before you start, upgrade Python to at least 3.7. With Python 3.4, the highest version of Pandas available is 0.22, which does not support specifying column names when creating a dictionary in all cases.

If you are running virtualenv, create a new Python environment and install Pandas like this:

You can check the Pandas version with:

Here we construct a Pandas dataframe from a dictionary. We use the Pandas constructor, since it can handle different types of data structures.

The dictionary below has two keys, scene and facade. Each value has an array of four elements, so it naturally fits into what you can think of as a table with 2 columns and 4 rows.

Pandas is designed to work with row and column data. Each row has a row index. By default, it is the numbers 0, 1, 2, 3, … But it also lets you use names.

So, let’s use the same in the array idx.

Here is the resulting dataframe: 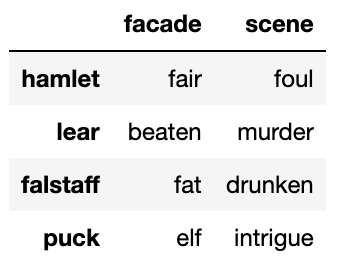 In the code, the keys of the dictionary are columns. The row indexes are numbers. That is default orientation, which is orient=’columns’ meaning take the dictionary keys as columns and put the values in rows. 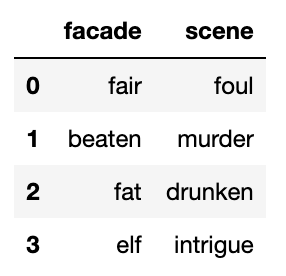 Now we flip that on its side. We will make the rows the dictionary keys.

Notice that the columns have no names, only numbers. That’s not very useful, so below we use the columns parameter, which was introduced in Pandas 0.23.

It’s as simple as putting the column names in an array and passing it as the columns parameter. One wonders why the earlier versions of Pandas did not have that.