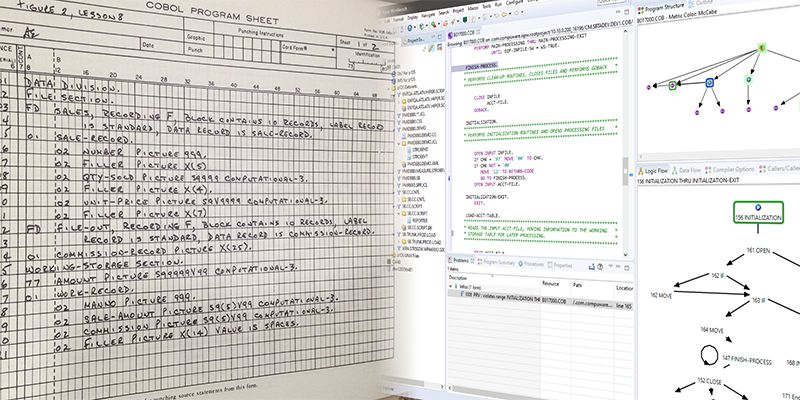 Overview: As COBOL celebrates its 60th anniversary, one mainframe software developer reflects on his grandmother’s programming career and how her work with COBOL inspires him today.

Before I worked in mainframe, my only exposure to COBOL was when it was briefly mentioned in the history section of my first computer engineering class. My grandmother wrote COBOL so it must be ancient, right?

I never expected that people were still out there using COBOL, much less that I would use it in my career. Working with the same technology that my grandma did 40 years ago has given me a newfound respect for her work and the impact of COBOL as a programming language.

In almost the same way I stumbled into mainframe, my grandma stumbled into programming without knowing much about it. She was an English major, but she wanted something different from her job as a newspaper editor. She took some programming classes because it was new, exciting and in demand.

“I thought of programming as just learning another ‘language,’ which I was good at.”

After getting her degree, she did a little freelance programming and then got hired at a mail order catalog company (those were still a thing back then) in the early 1980s. They had data on hundreds of thousands of customers stored on 14″ reels of tape. Her responsibility was to write COBOL programs that would sort and filter that customer data so it could be used in targeted marketing.

It seems trivial now, but this process was actually quite innovative for the time. Before computers, it just wasn’t feasible to sort through that many customer records efficiently enough to do anything useful. Their shiny, new IBM machine allowed them to do amazing things, but we’ve come a long way since then.

Today, the data would probably be stored on super-efficient hard disk drives instead of reels of tape. If the data were organized into a Db2 database, Grandma’s complex sorting and filtering programs could probably be simplified with a few well-crafted SQL queries. It could also be set up with encryption and redundant backups for security and data integrity, all automatically managed by z/OS.

Of course, our programs run much faster on modern machines, but we can also write those programs faster as well. Grandma had to LITERALLY WRITE her programs on paper. When they were finished, she would send it off to another person that would punch it in for her (yes, they used punch cards then). She received a stack of cards back days later. Because the keypunchers sometimes made mistakes, she had to proofread that stack of cards before even attempting to compile it.

When I’m programming, I compile countless times a day to check my work and verify my program. I just click one button and get my results in seconds. In fact, with code analysis like Program Analysis in Compuware Topaz, I am notified of errors as I’m programming, before I hit that button to compile. When my program is finished, I have automated tests I can run that will verify it before sending it out. Grandma just had to cross her fingers and wait for the “IT WORKED!” fax.

“No matter how much you checked everything, you were always a little nervous when it went out.”

With over 50 years of updates for ease of use, efficiency, and scalability, COBOL isn’t the same today as it was when my grandma was programming. Back then, it didn’t even support basic features like pointers, floating-point and binary arithmetic or recursion. Now, COBOL supports all of that plus more modern features like containers, function overloading, automatic compile-time optimization, and much more.

COBOL has features that compete against some of the trendiest and most advanced languages out there. However, one feature in particular is responsible for COBOL’s staying power. COBOL was always designed with backward compatibility in mind to ensure your programs always work. COBOL programs initially written decades ago are still doing their job today. For example, the modern version of COBOL could still compile Grandma’s old programs with minimal refactoring. She’d probably want to take advantage of those new features (and she’d definitely want to copy them off of those punch cards), but it would work even if she doesn’t.

COBOL on the mainframe works, has worked for the past 60 years, and will continue to work in the future. While there is still COBOL code out there, Compuware will continue to help streamline its development, testing, and maintenance (for at least the next 50 years). I’ll probably be retired by then, but I bet COBOL will still be around. Maybe someone will learn about the work I did, and it will inspire them like my grandma has inspired me.

Devin Berchtold is a Mainframe Software Developer currently working on Strobe at BMC Compuware. He graduated from the University of Illinois at Urbana-Champaign with a Bachelor's in Computer Engineering. In his spare time, Devin enjoys video games, cooking, camping, and long walks on the beach.