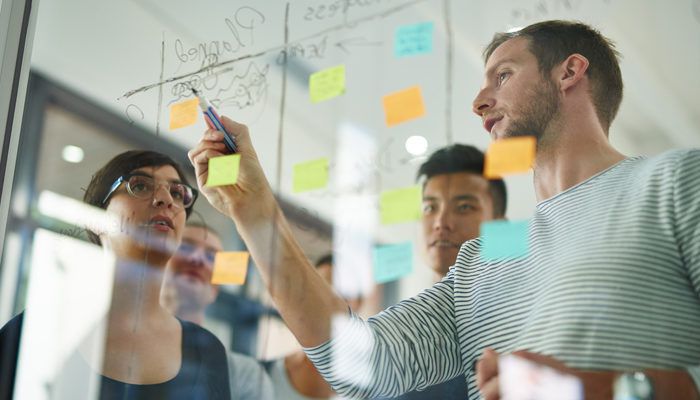 The SOLID principles were developed by Robert C. Martin in a 2000 essay, “Design Principles and Design Patterns,” although the acronym was coined later by Michael Feathers. In his essay, Martin acknowledged that successful software will change and develop. As it changes, it becomes increasingly complex. Without good design principles, Martin warns that software becomes rigid, fragile, immobile, and viscous. The SOLID principles were developed to combat these problematic design patterns.

The broad goal of the SOLID principles is to reduce dependencies so that engineers change one area of software without impacting others. Additionally, they’re intended to make designs easier to understand, maintain, and extend. Ultimately, using these design principles makes it easier for software engineers to avoid issues and to build adaptive, effective, and agile software.

While the principles come with many benefits, following the principles generally leads to writing longer and more complex code. This means that it can extend the design process and make development a little more difficult. However, this extra time and effort is well worth it because it makes software so much easier to maintain, test, and extend.

Following these principles is not a cure-all and won’t avoid design issues. That said, the principles have become popular because when followed correctly, they lead to better code for readability, maintainability, design patterns, and testability. In the current environment, all developers should know and utilize these principles.

Robert Martin summarizes this principle well by mandating that, “a class should have one, and only one, reason to change.” Following this principle means that each class only does one thing and every class or module only has responsibility for one part of the software’s functionality. More simply, each class should solve only one problem.

Single responsibility principle is a relatively basic principle that most developers are already utilizing to build code. It can be applied to classes, software components, and microservices.

Utilizing this principle makes code easier to test and maintain, it makes software easier to implement, and it helps to avoid unanticipated side-effects of future changes.

The idea of open-closed principle is that existing, well-tested classes will need to be modified when something needs to be added. Yet, changing classes can lead to problems or bugs. Instead of changing the class, you simply want to extend it. With that goal in mind, Martin summarizes this principle, “You should be able to extend a class’s behavior without modifying it.”

At first glance, these two criteria seem to be inherently contradictory, but when you become more comfortable with it, you’ll see that it’s not as complicated as it seems. The way to comply with these principles and to make sure that your class is easily extendable without having to modify the code is through the use of abstractions. Using inheritance or interfaces that allow polymorphic substitutions is a common way to comply with this principle. Regardless of the method used, it’s important to follow this principle in order to write code that is maintainable and revisable.

Of the five SOLID principles, the Liskov Substitution Principle is perhaps the most difficult one to understand. Broadly, this principle simply requires that every derived class should be substitutable for its parent class. The principle is named for Barbara Liskov, who introduced this concept of behavioral subtyping in 1987. Liskov herself explains the principle by saying:

What is wanted here is something like the following substitution property: if for each object O1 of type S there is an object O2 of type T such that for all programs P defined in terms of T, the behavior of P is unchanged when O1 is substituted for O2 then S is a subtype of T.

While this can be a difficult principle to internalize, in a lot of ways it’s simply an extension of open-closed principle, as it’s a way of ensuring that derived classes extend the base class without changing behavior.

The general idea of interface segregation principle is that it’s better to have a lot of smaller interfaces than a few bigger ones. Martin explains this principle by advising, “Make fine grained interfaces that are client-specific. Clients should not be forced to implement interfaces they do not use.”

For software engineers, this means that you don’t want to just start with an existing interface and add new methods. Instead, start by building a new interface and then let your class implement multiple interfaces as needed. Smaller interfaces mean that developers should have a preference for composition over inheritance and for decoupling over coupling. According to this principle, engineers should work to have many client-specific interfaces, avoiding the temptation of having one big, general-purpose interface.

One popular way to comply with this principle is through the use of a dependency inversion pattern, although this method is not the only way to do so. Whatever method you choose to utilize, finding a way to utilize this principle will make your code more flexible, agile, and reusable.

While implementing these principles can feel overwhelming at first, regularly working with them and understanding the differences between code that complies with the principles and code that does not will help to make good design processes easier and more efficient.