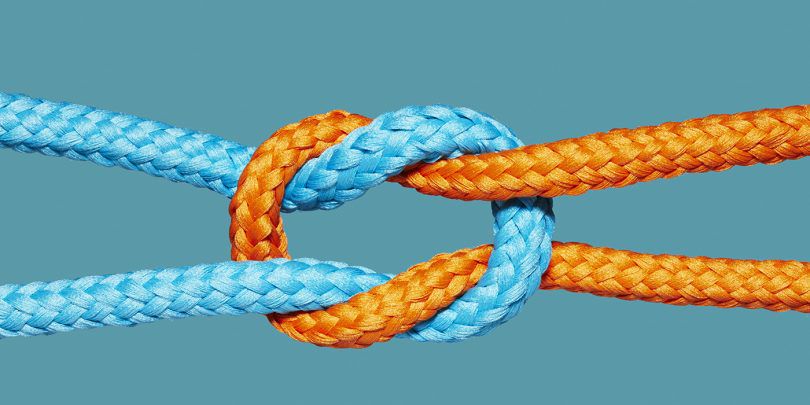 With larger data sets, various implementations, algorithms, and learning requirements, it has become even more complex to create and evaluate ML models since all those factors directly impact the overall accuracy and learning outcome of the model. This is further skewed by false assumptions, noise, and outliers.

Machine learning models cannot be a black box. The user needs to be fully aware of their data and algorithms to trust the outputs and outcomes. Any issues in the algorithm or polluted data set can negatively impact the ML model.

(New to ML? Read our ML vs AI explainer.)

What is bias in machine learning?

Bias is a phenomenon that skews the result of an algorithm in favor or against an idea.

Bias is considered a systematic error that occurs in the machine learning model itself due to incorrect assumptions in the ML process.

Technically, we can define bias as the error between average model prediction and the ground truth. Moreover, it describes how well the model matches the training data set:

Characteristics of a high bias model include: 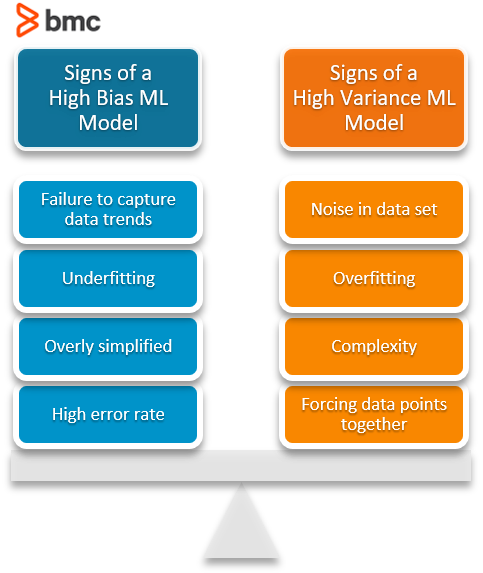 What is variance in machine learning?

Variance refers to the changes in the model when using different portions of the training data set.

Simply stated, variance is the variability in the model prediction—how much the ML function can adjust depending on the given data set. Variance comes from highly complex models with a large number of features.

All these contribute to the flexibility of the model. For instance, a model that does not match a data set with a high bias will create an inflexible model with a low variance that results in a suboptimal machine learning model.

Characteristics of a high variance model include:

The terms underfitting and overfitting refer to how the model fails to match the data. The fitting of a model directly correlates to whether it will return accurate predictions from a given data set.

Bias vs variance: A trade-off

Bias and variance are inversely connected. It is impossible to have an ML model with a low bias and a low variance.

When a data engineer modifies the ML algorithm to better fit a given data set, it will lead to low bias—but it will increase variance. This way, the model will fit with the data set while increasing the chances of inaccurate predictions.

The same applies when creating a low variance model with a higher bias. While it will reduce the risk of inaccurate predictions, the model will not properly match the data set.

It’s a delicate balance between these bias and variance. Importantly, however, having a higher variance does not indicate a bad ML algorithm. Machine learning algorithms should be able to handle some variance.

We can tackle the trade-off in multiple ways…

Increasing the complexity of the model to count for bias and variance, thus decreasing the overall bias while increasing the variance to an acceptable level. This aligns the model with the training dataset without incurring significant variance errors.

Increasing the training data set can also help to balance this trade-off, to some extent. This is the preferred method when dealing with overfitting models. Furthermore, this allows users to increase the complexity without variance errors that pollute the model as with a large data set.

A large data set offers more data points for the algorithm to generalize data easily. However, the major issue with increasing the trading data set is that underfitting or low bias models are not that sensitive to the training data set. Therefore, increasing data is the preferred solution when it comes to dealing with high variance and high bias models.

This table lists common algorithms and their expected behavior regarding bias and variance:

The simplest way to do this would be to use a library called mlxtend (machine learning extension), which is targeted for data science tasks. This library offers a function called bias_variance_decomp that we can use to calculate bias and variance.

We will be using the Iris data dataset included in mlxtend as the base data set and carry out the bias_variance_decomp using two algorithms: Decision Tree and Bagging. 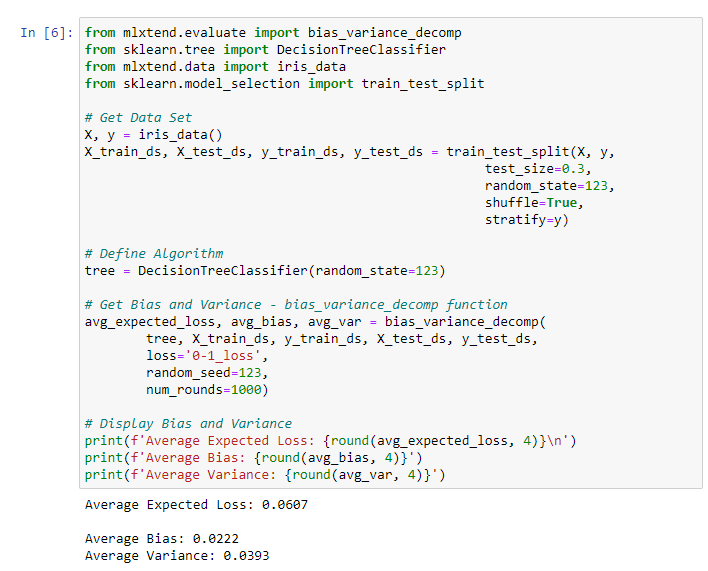 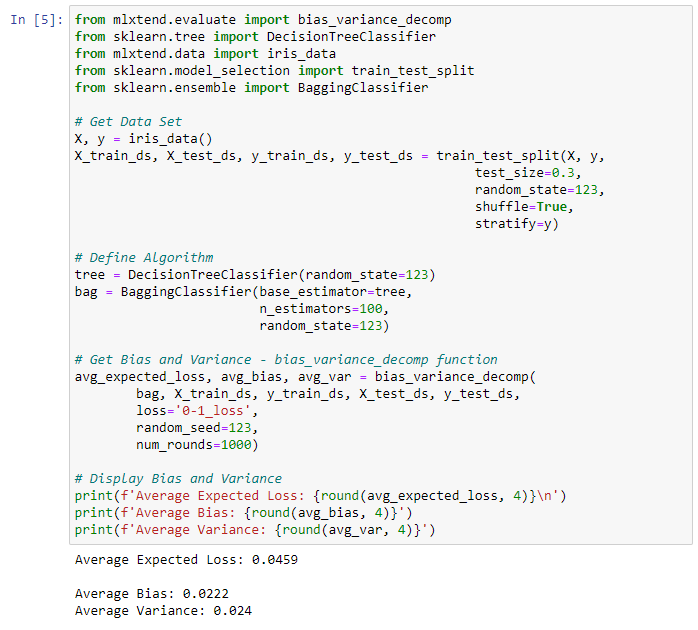 Each of the above functions will run 1,000 rounds (num_rounds=1000) before calculating the average bias and variance values. There, we can reduce the variance without affecting bias using a bagging classifier. The higher the algorithm complexity, the lesser variance.

In the following example, we will have a look at three different linear regression models—least-squares, ridge, and lasso—using sklearn library. Since they are all linear regression algorithms, their main difference would be the coefficient value.

We can see those different algorithms lead to different outcomes in the ML process (bias and variance). 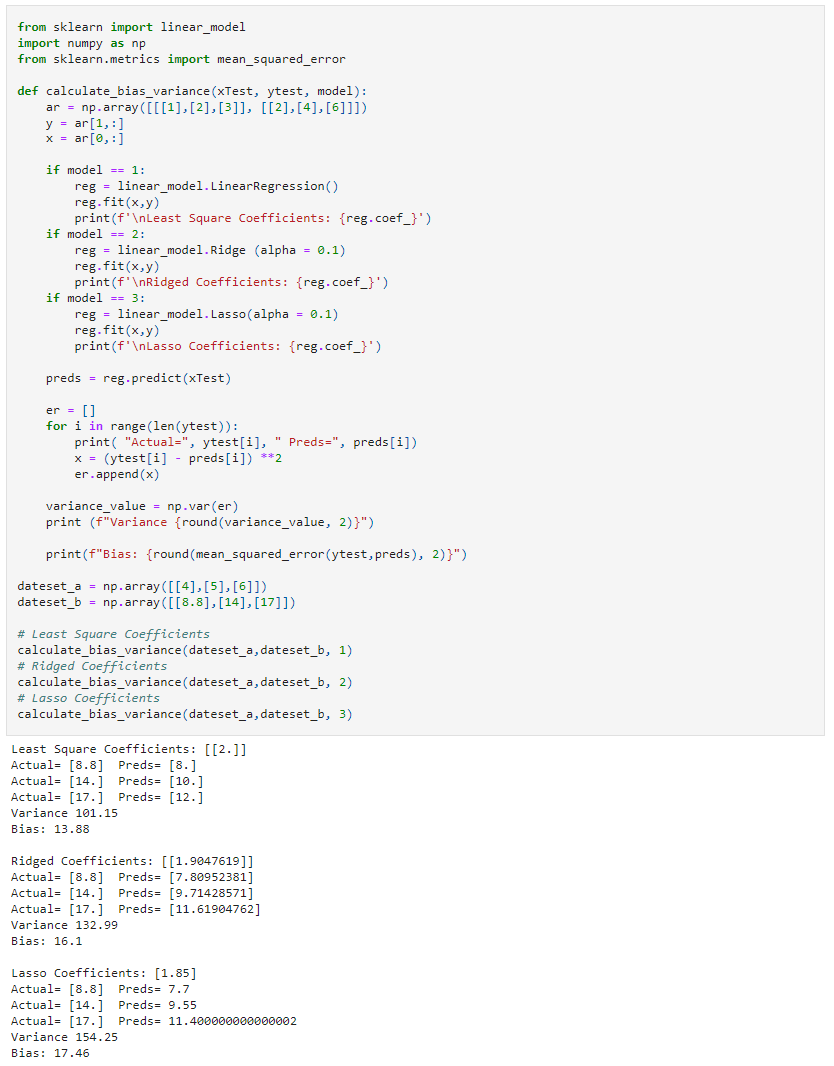 Bias and variance are two key components that you must consider when developing any good, accurate machine learning model.

Users need to consider both these factors when creating an ML model. Generally, your goal is to keep bias as low as possible while introducing acceptable levels of variances. This can be done either by increasing the complexity or increasing the training data set.

In this balanced way, you can create an acceptable machine learning model.