Keras can be used to build a neural network to solve a classification problem. In this article, we will:

For some of this code, we draw on insights from a blog post at DataCamp by Karlijn Willems.

(This tutorial is part of our Guide to Machine Learning with TensorFlow & Keras. Use the right-hand menu to navigate.)

Keras is an API that sits on top of Google’s TensorFlow, Microsoft Cognitive Toolkit (CNTK), and other machine learning frameworks. The goal is to have a single API to work with all of those and to make that work easier.

In my view, you should always use Keras instead of TensorFlow as Keras is far simpler and therefore you’re less prone to make models with the wrong conclusions. Too many people dive in and start using TensorFlow, struggling to make it work. Keras adds simplicity. But you can use TensorFlow functions directly with Keras, and you can expand Keras by writing your own functions.

In order to run through the example below, you must have Zeppelin installed as well as these Python packages:

First, we use this data set from Kaggle which tracks diabetes in Pima Native Americans. We use it to build a predictive model of how likely someone is to get or have diabetes given their age, body mass index, glucose and insulin levels, skin thickness, etc.

The code below plugs these features (glucode, BMI, etc.) and labels (the single value yes [1] or no [0]) into a Keras neural network to build a model that with about 80% accuracy can predict whether someone has or will get Type II diabetes.

Here we are going to build a multi-layer perceptron. This is also known as a feed-forward neural network. That’s opposed to fancier ones that can make more than one pass through the network in an attempt to boost the accuracy of the model.

If the neural network had just one layer, then it would just be a logistic regression model.

You can still think of this as a logistic regression model, but one having a higher degree of accuracy by running logistic regression calculations multiple times. That’s the basic idea behind the neural network: calculate, test, calculate again, test again, and repeat until an optimal solution is found. This approach works for handwriting, facial recognition, and predicting diabetes.

Each perceptron makes a calculation and hands that off to the next perceptron. This calculation is really a probability. In the case of a classification problem a threshold t is arbitrarily set such that if the probability of event x is > t then the result it 1 (true) otherwise false (0). For logistic regression, that threshold is 50%.

The functions used are a sigmoid function, meaning a curve, like a sine wave, that varies between two known values. The logistic sigmoid function works well in this example since we are trying to predict whether someone has or will get diabetes (1) or not (0).

It’s a number that’s designed to range between 1 and 0, so it works well for probability calculations.

In the simple linear equation y = mx + b we are working with only on variable, x. You can solve that problem using Microsoft Excel or Google Sheets. You don’t need a neural network for that.

In most problems we face in the real world, we are dealing with many variables. In that case m and x are matrices. But the math is similar because we still have the concept of weights and bias in mx +b.

In the formula below, the matrix is size m x 1 below. So it’s a vector, which is a one-dimensional matrix. Each of i= 1, 2, 3, …, m weights is wi. And there are m features (x) x1, x2, x3, …, xm. x is BMI; glucose, etc. in the diabetes data. The weights w1, w2, …, wm and the bias is the number that most accurately predicts the relationship between those indicators and the probability that the person is diabetic.

For each node in the neural network, we calculate the dot product of w • x, which means multiple every weight w by every feature x taken from our training set, and then add a bias b to shift the calculation up or down.

The expanded calculation looks like this, where you take every element from vector w and multiple it by its corresponding element in vector x.

This gives us a real number. In the case of the logistic function, as we said above, it f(x) > %50 then the perceptron outputs 1. Otherwise 0.

The algorithm stops when the model converges, meaning when the error reaches the minimum possible value. In plain English, that means we have built a model with a certain degree of accuracy. The error is the value error = 1 – (number of times the model is correct) / (number of observations).

A mathematician would say the model converges when we have found a hyperplane that separates each point in this m dimensional space (since there are m input variables) with maximum distance between the plane and the points in space. Each of the positive outcomes is on one side of the hyperplane and each of the negative outcomes is on the other. In other words, it’s like calculating the LSE (least squares error) in a simple linear regression problem, except this is working in more than one dimension.

If no such hyperplane exists, then there is no solution to the problem. Then we conclude that a model cannot be built because there is not enough correlation between the variables.

Remember that the approach to solving such a problem is iterative. In terms of a neural network, you can see this in this graphic below. 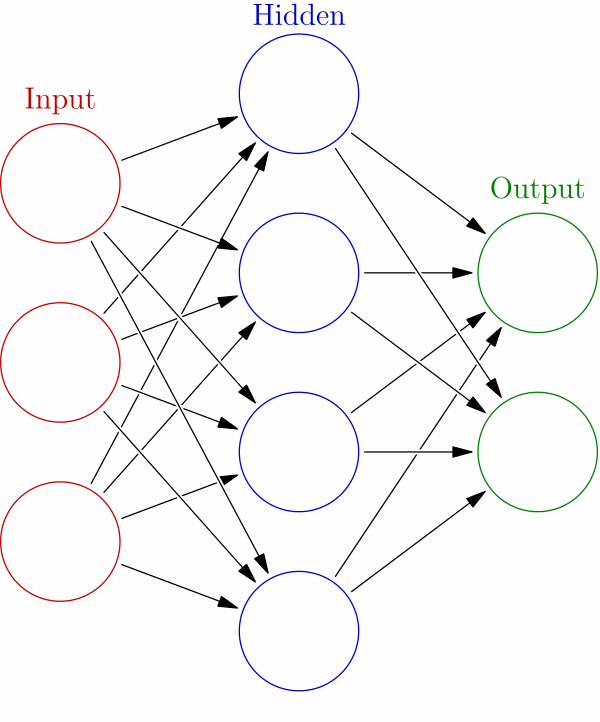 We have an input layer, which is where we feed our matrix of features and labels. Those perceptron functions then calculate an initial set of weights and hand off to any number of hidden layers. How many times it does this is governed by the parameters you pass to the algorithms, the algorithm you pick for the loss and activation function, and the number of nodes that you allow the network to use.

The final solution comes out in the output later. There’s just one input and output layer. There’s no scientific way to determine how many hidden layers you should use. The data scientist just varies those and the algorithms used at each layer until the most accurate solution is found. So it’s trial and error.

We have stored the code for this example in a Jupyter notebook here.

A first step in data analysis should be plotting as it is easier to see if we can discern any pattern.

We could start by looking to see if there is some correlation between variables. So, we use the powerful Seaborn correlation plot. Seaborn is an extension to matplotlib.

First load the data into a dataframe:

Then visually inspect it:

You can also inspect the values in the dataframe like this:

Next, run this code to see any correlation between variables. That is not important for the final model but is useful to gain further insight into the data.

Seaborn creates a heatmap-type chart, plotting each value from the dataset against itself and every other value. Then it figures out if these two values are in any way correlated with each other. 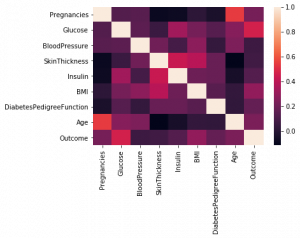 There’s not a lot of orange squares in the chart. So, you can say that no single value is 80% likely to give you diabetes (outcome). There does not seem to be much correlation between these individual variables. But, we will see that when taken in the aggregate we can predict with almost 75% accuracy who will develop diabetes given all of these factors together.

You can check the correlation between two variables in a dataframe like shown below. There is not much correlation here since 0.28 and 0.54 are far from 1.00.

Now we normalize the values, meaning take each x in the training and test data set and calculate (x – μ) / δ, or the distance from the mean (μ) divided by the standard deviation (δ). That put the data on a standard scale, which is a standard practice with machine learning.

StandardScaler does this in two steps: fit() and transform().

The code below created a Keras sequential model, which means building up the layers in the neural network by adding them one at a time, as opposed to other techniques and neural network types.

Pick an activation function for each layer. It takes that ((w • x) + b) and calculates a probability. Then it sets a threshold to determine whether the neuron ((w • x) + b) should be 1 (true) or (0) negative. (That’s not the same as saying diabetic, 1, or not, 0, as neural networks can handle problems with more than just two discrete outcomes.)

For the first two layers we use a relu (rectified linear unit) activation function. That choice means nothing, as you could have picked sigmoid. reluI is 1 for all positive values and 0 for all negative ones. So:

The rule as to which activation function to pick is trial and error. Pick different ones and see which produces the most accurate predictions. There are others: Sigmoid, tanh, Softmax, ReLU, and Leaky ReLU. Some are more suitable to multiple rather than binary outputs.

This graph from Beyond Data Science shows each function plotted as a curve.

Some notes on the code:

Above, we talked about the iterative process of solving a neural network for weights and bias. That’s done with epochs. Here is the output as it runs those. As you can see the accuracy goes up quickly then levels off.

You can use model.summary() to print some information.

Here are the weights for each layer we mentions.

We can also draw a picture of the layers and their shapes. It’s not very useful but nice to see.

As you would expect, the shape of the output is 1, as there we have our prediction: 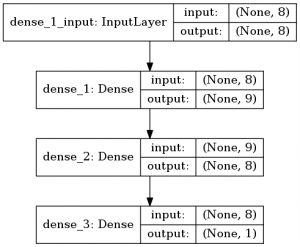 Then we can get configuration information on each layer with layer.get_config and the model with model.get_config():

Now we can run predictions on test data.

This prints the score, or accuracy.

So, our predictive model is 72% accurate.

If you read the discussions at data camp you can see other analysts have been able to get slightly better results trying other techniques. But remember the danger of overfitting.