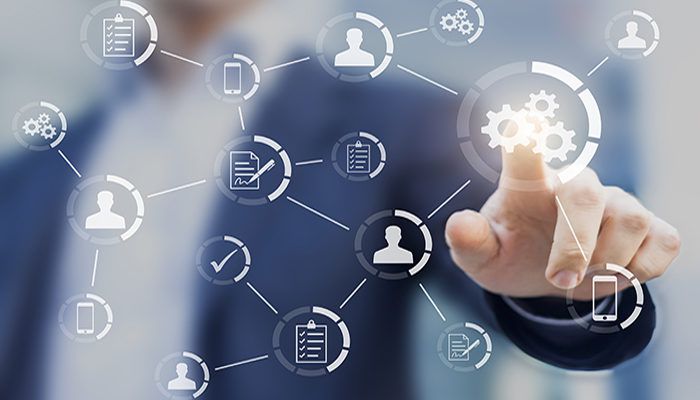 It’s been pretty well established that the pandemic accelerated the digital transformation of organizations across a range of industries, but what about the public sector? As part of the global ADE Index commissioned by BMC in a partnership with 451 Research, an S&P Company, we measured the current adoption rate of the future-state Autonomous Digital Enterprise (ADE); the perceived importance of each operating characteristic and technology-enabled tenet; and where respondents expect to be in two years across 1,200 business and IT decision-makers in 20 industry categories and 11 countries.

When we looked at the data, something interesting happened with the numbers in the public sector—across the board, those organizations tracked lower than their industrial counterparts in software/IT, financial services, healthcare, telco, retail, and manufacturing. For example, in the category of Innovation Ecosystems, software and IT businesses had an index of 46 percent with a projected growth to 52 percent in two years, while the public sector indices were 16 and 20 percent, respectively. Automation Everywhere also had a significant differential—54 and 60 percent for industry verticals versus 23 and 28 percent for the public sector.

While the public sector is a laggard in its digital transformation (everywhere except in the Asia Pacific region, where the numbers are markedly higher), its leaders plan to improve, but they’re still pretty far behind the curve—by almost ten points—to the nearest sectors, manufacturing and retail.

What’s the hold up? In most cases, it’s a lot of red tape. Layers upon layers of approvals and processes designed to control purse strings have hindered innovation and prevented real-time decision making. There’s also the matter of a staid workforce and a lack of investment in upskilling to prepare for the next generation of technology. New industry research indicates the tide might be turning on those fronts.

According to the survey, the pandemic also re-prioritized the overall goal for digital transformation. Creating new business models was the primary objective for 34 percent before the pandemic and that jumped to 72 percent afterward.

Budgeting can make or break progress in the public sector. The US government is putting money behind its digital efforts with a plan that will fund projects to modernize high-priority systems, enact baseline cybersecurity and privacy measures, and support public-facing digital services and cross-government collaboration and scalability.

France unveiled its own stimulus plan last fall, allotting $8.4 billion (€7 billion) to digital investments—dedicating $360 million (€300 million) to education for the tech sector and $460 million (€385 million) to the digital transformation of small and medium companies.

Once all those investments and initiatives take hold, the public sector workforce will need to evolve, too. That means upskilling and reskilling, and governments are working with the private sector to help prepare their people.

Amazon Web Services (AWS) has stepped in to help upskill public sector employees with its international AWS DigiGov and US-based Amazon BRIDGE (Broadening Research and Innovation for Defense and Government Employees) programs and fellowships to get government workers up to speed on all things cloud. Last summer, the US Office of Management and Budget initiated a reskilling initiative to further develop the data science skills of federal workers.

In the UAE, the Abu Dhabi School of Government and Abu Dhabi Digital Authority (ADDA) announced the “Maharat Platform,” a partnership with Microsoft to upskill the emirate’s public sector workforce. The plan is to use Microsoft Cloud Society expertise to increase skill levels across different knowledge domains and ensure that Abu Dhabi government employees “gain a deeper understanding” of data, artificial intelligence, machine learning, DevOps, cloud, security, and app development.

Many of the public sector organizations that ramped up their digital investments last year did so in response to public health and safety measures. In some cases, it was at the behest of their own people, who suddenly needed access from home and realized the existing systems couldn’t deliver it.

The 2020 Deloitte–National Association of State Chief Information Officers (NASCIO) Cybersecurity Study found that 35 states have had more than half of their employees working remotely during the pandemic, and nine have had more than 90 percent working from home. According to research from EY, pre-pandemic, less than 20 percent of public sector employees were working remote often or always.

The shift to an almost wholly online workforce required a heavy lift, from getting laptops out to employees to increasing bandwidth and security measures to support them. According to the EY survey, 78 percent of respondents said their governmental organizations were moderately to extremely effective at managing remote working challenges.

In our ADE Index, the ADE tenet of Adaptive Cybersecurity measured just 30 percent for public sector, with a projected growth to 37 percent in two years (and again much higher in Asia-Pacific—59 percent up to 82 percent in two years). The Deloitte study examined cybersecurity and the work of the states’ CIOs and chief information security offers (CISOs), taking the pandemic into consideration.

It found that 40 percent of states operate under a federated model, where “CISOs are responsible for enterprise policy with a mix of centralized shared services and agency-led services,” while ten percent operate in a decentralized model of cybergovernance where each state agency handles its own cyberservices and execution and only gets policy guidance from the CIO. Twenty-eight percent collaborate extensively with local governments on security, while sixty-five percent report limited collaboration.

Most states said a centralized IT operating model (another ADE component) would help them reduce risks and improve their security posture—so 60 percent still have more work to do. That’s in addition to the need to evolve technology. Thirty-four percent of those surveyed cite the inability of legacy infrastructure and solutions to support emerging threats as a major challenge, in addition to the usual budget (46 percent) and skills (42 percent) issues.

The study also found that cybersecurity was a greater investment for the federal government than it was for the states, and even then, it varied widely from department to department—it’s 28 percent of the IT budget for justice and only seven percent for transportation.

As public sector organizations strive to catch up and keep pace, a joint study by PwC and the World Economic Forum (WEF), Harnessing Technology for the Global Goals: A framework for government action, lays out three key characteristics organizations must adopt to grow their technology for the future, including: resilience and adaptability; speed; and collaboration within the public and private sector. The study explains that each characteristic can also generate benefits beyond tech to larger governmental initiatives around the economy and climate change.

The study also includes helpful checklists for organizations and public sector leaders to analyze their current state in the areas of governance and accountability; innovation, research and development; finance for commercialization; people and skills; and collective action and collaboration, so they can determine where best to dedicate their resources and staff as they grow their technology.

For more information on the ADE Index, download the research paper, “The Autonomous Digital Enterprise: A Strategic Approach to Measuring and Improving Digital Competitiveness,” and use the interactive tool to see how you measure up.

The Autonomous Digital Enterprise: A Strategic Approach to Measuring and Improving Digital Competitiveness 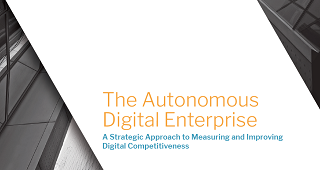 The Autonomous Digital Enterprise: A Strategic Approach to Measuring and Improving Digital Competitiveness